This article uses material from the “Yumeko Jabami” article on the Kakegurui Wikia at FANDOM is licensed under the Creative Commons Attribution-Share Alike License.

Yumeko Jabami is the main protagonist of Kakegurui anime and manga.

The eponymous compulsive gambler, a new transfer Student at Hyakkaou Private Academy who quickly throws the established order into chaos with her habits. Gambling is Serious Business to her, but not in the way one might expect—she's truly unpredictable, not caring whether she wins or loses so long as she can enjoy the insanity of her and her opponent putting everything on the line on a truly uncertain outcome. Her current goal is having a match with Kirari Momobami, though of course she isn't going to turn down challenges from the rest of the Student Council along the way.

Yumeko is a very attractive pale-skinned girl with a large bust. She has long black hair that is styled in a hime-cut and brown eyes, along with two curved streaks at the side of her face. In the anime and manga, her eyes are sometimes seen glowing red whenever she becomes excited. She wears the standard female Hyakkaou Private Academy issued uniform; a red blazer with black trim lining the cuffs and collar, a white button-up dress shirt, a dark pleated skirt, a tie and black/grey colored stockings. As well as the academy's issued footwear, brown colored loafers with black soles. She also sports red lipstick and has red painted fingernails (sometimes seen pink). She wears a ring around her left thumb.

Yumeko is shown to be a very upbeat and charismatic character, consistently attracting the affection or interest of those around her. Not only is she able to befriend those who previously disliked her, she is able to catch the attention of the entire student body. She does just that on her very first day of school and manages to continue doing so on nearly a daily basis. Every time she notices an opponent cheating in games, her button gets switched to a bloodthirsty side of her, usually seen when her eyes turn red and she frightens her opponents.

Though she is typically very friendly, she abstains from acting this way when she uses her perceptiveness to expose her classmates' cheating. She is capable of doing this even after only a couple of rounds of gambling, as she is easily able to decipher what strategies and tricks they are using to skew the game in their favor. While doing this, she may unabashedly condemn the other player and their ways, preferring honesty over politeness in such cases.

Despite the disadvantage she faces when others cheat, she does not concede. This is largely due to the fact that she does not seem to experience fear or anxiety from taking risks. In fact, it gives her a thrill. Because of this, she tends to take high-risk bets in gambles, even if she has nothing to rely on but luck. Though this can sometimes end in her loss, she is emotionally unaffected by the results; she simply uses her loss or gains a means to further indulge her gambling habit.

She seems to be fairly aware of her eccentricities and that her way of gambling doesn't follow normal conduct. As such she rejoices when people support her or encourage her, especially those close to her, greatly valuing their friendship, albeit in her own ways. She rationally understands that her behaviour is immoral as she confesses to feel guilt for not feeling guilt over the people she has ruined through gambling.

When climbing the stairs in the Tower of Doors, she mentions that she has very little stamina. 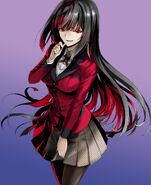 Add a photo to this gallery
Retrieved from "https://all-worlds-alliance.fandom.com/wiki/Yumeko_Jabami?oldid=59327"
Community content is available under CC-BY-SA unless otherwise noted.