Tooru Oikawa is a character from the Haikyuu!! anime and manga.

Oikawa is the captain of Aoba Johsai's volleyball team and is widely regarded as the ace setter. A former member and setter of Kitagawa Daiichi, he won the "Best Setter Award" in the Miyagi prefecture during his third year in junior high.

Oikawa has dark, chocolate-brown hair that is swept outwards and eyes of corresponding color. Many others find him attractive, to the point where several girls follow him around. Oikawa frequently smiles and grins (although Iwaizumi notes that these expressions are rarely genuine). He tends to make victory signs or large waving gestures, which are often accompanied by broad smiles or a wink. Another trademark expression of his is sticking out his tongue while smiling and closing one eye.

Oikawa has a fairly decent height for a volleyball player, standing just over six feet. He wears a white brace on his right knee due to a previous injury. While on the court, Oikawa wears a standard aqua and white Aobajohsai High uniform emblazoned with the number one. He also wears dark gray athletic shoes with blue details. At other times, Oikawa dresses in the Aobajohsai uniform, which consists of khakis with dark brown detailing, a cream-colored vest, a dark red tie, a lavender button-down shirt, and a white blazer. During a practice match with Karasuno High, Oikawa dons a green #13 sports bib on top of an aqua t-shirt. It is also shown that he wears glasses in one instance, but it is possible the reason he does not wear them is that most of the time he wears contacts or simply does not possess such bad eyesight that it would hinder him during his daily routine.

Despite his flirtatious nature (which makes him famous amongst female students, much to Tanaka and Nishinoya's envy) and childishness (as pointed out by his nephew and Iwaizumi), Oikawa is an excellent, well-rounded player and is extremely serious about volleyball. He's known to have a "disgusting personality" amongst both opponents and his own teammates because of his smug, yet outwardly flippant attitude. Oikawa also frequently makes cheerful remarks, but follows them up with serious or intimidating afterthoughts. Oikawa is extremely intelligent and cunning and easily figures out both his teammates and opponents' weaknesses.

Oikawa holds a grudge against Kageyama, whom he mockingly calls Tobio-chan. This is due to his feelings of inferiority when compared to Kageyama, who has been hailed as a genius setter since their time spent at Kitagawa Daiichi. Kageyama can unintentionally bring out the more childish or rash aspects of Oikawa's personality.

Oikawa works extremely hard and often endures vigorous practices after his normal practices with the team. This has led him to injuring himself in the past. In addition, Oikawa spends time watching past games of his rivals, observing their movements ahead of time and strategizing how to defeat them. Despite that, he still takes time off on Mondays for resting. Oikawa is ambitious, but it's shown that he also has feelings of inferiority towards those he deems as better than him, Ushijima and Kageyama for examples. This is one of the main reasons he pushes himself so hard.

He is most feared for his powerful and accurate jump serve, which he has honed and perfected from a young age. He can maintain a calm and cool composure during any match, no matter how tense it is. Despite not being considered a "genius", Oikawa is a stunning player and one of the best all-around players in the prefecture.

Unlike Kageyama's genius setting technique, Oikawa's talent lies in his natural athletic ability, his skill to make full use of his teammates, finding weaknesses in the opposing teams, sharp aims, and powerful serves. Within a short span of time on the court, he was able to point out that Tsukishima and Hinata were weak at receiving, and break Kageyama and Hinata's god-like quick. This, however, is not without years of dedication and practices, which is why his previous girlfriend dumped him. His talent is even acknowledged by Ushijima from Shiratorizawa Academy, who states that Oikawa's talent lies in his ability to draw the full potential out of any team.

Oikawa is renowned for his powerful jump-serve, a technique he had seen on television and thought was amazing, so he worked hard since junior high to master the technique. He serves with pinpoint accuracy, often strategically targeting a member of the opposing team, a gap between two players (as seen with Nishinoya and Tanaka, as well as Daichi and Asahi) or using a different scheme to win a service ace. It is difficult to return, but Nishinoya's talent as a libero allowed him to do so skillfully. Because of the strain the jump-serve has on Oikawa's focus, his coach allows him to take time-outs and breaks alone to regain the concentration necessary to successfully execute them by focusing on the aspects that are easy to fumble.

During the Spring High Tournament, it seems Oikawa's jump serve has evolved. According to Sawamura, his serves can become so powerful that it can look like a spike. According to Coach Ukai, he seems to be putting more emphasis on power than control. Amusingly, the rest of the team requested the foods that they want Oikawa to buy if they lose the first point (where Oikawa lost the toss and was sent to serve.)

Both in-game and in daily life, Oikawa has a good sense of his surroundings and can effortlessly read others' moves and emotions. Because of this, he was able to pick up almost immediately on Kageyama and Hinata's strategy behind their god-like quick.

Natural Talent as a Setter

Oikawa's tosses are made so that they are easiest for his teammates to hit. After each toss, he immediately asks how they can be improved afterward. Oikawa's abilities as a setter are so great that he is said to draw out the maximum potential of whatever team he is on. In particular, it is said that he draws out 100% of the potential of each individual spiker. He is also shown to be talented at performing Dumps at the most  unexpected times 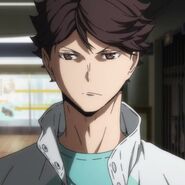 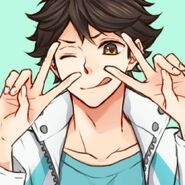 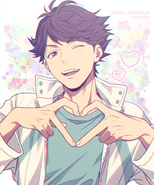 Add a photo to this gallery

Retrieved from "https://all-worlds-alliance.fandom.com/wiki/Tooru_Oikawa?oldid=59325"
Community content is available under CC-BY-SA unless otherwise noted.