All Worlds Alliance Wiki
Register
Don't have an account?
Sign In
Advertisement
in: Characters, Females, Heroes Coalition,
and 4 more

This article uses material from the “Shizuka Hiratsuka” article on the OreGairu Wiki at FANDOM is licensed under the Creative Commons Attribution-Share Alike License.

Shizuka Hiratsuka is a character from the Yahari Ore no Seishun Love Come wa Machigatteiru anime and light novels.

Shizuka is Hachiman's teacher, a language teacher who serves as his futures advisor/counselor. She is aware of Hachiman's supposed "problems", and takes steps to ensure he is freed from them, her first move being to force him into joining the Service Club. However, she appears to have some quirks of her own: she is a young smoker, she is very sensitive about her age, and she is often prone to quoting or copying scenes from popular shounen manga. She also never remembers to knock before entering the Service Club's classroom, much to Yukino's chagrin.

In the XP4 fics, Shizuka debuted in the XP4 Heroes Coalition - Neo-City Diaries.

Shizuka is a fairly tall, busty woman. She has purple eyes and long, black hair that reaches her shins, sticks out at her neck and falls over her shoulders. She is seen wearing a knee length white jacket similar to a lab coat, a black vest, and black pants with a brown belt. Underneath her vest is a dress shirt and a loosely worn short tie.

In the light novels, she wears a longer black tie and a grey belt.

Hiratsuka, who is mentioned as incredibly kind, is a friendly and responsible teacher who is open minded and believes in the future of her students. Pointed out by Yukino, she wishes and works hard for the welfare of all her students. She cares about all the students which is perhaps best demonstrated when she becomes concerned about her student Saki Kawasakiregarding her late night job.

Despite her age, Shizuka enjoys reading shōnen manga to the extent that she often quotes or copies scenes from them, for example, when she proposes the battle royale contest between Yukino and Hachiman. She also enjoys having fun with her students and observing their interactions, further demonstrating her youthful outlook.

On her days off, she drinks until morning and sleeps till noon. She usually gets assigned in charge of various school activities like cultural festival, athletic festival, the article of Love Marriage, Chiba Wedding, and Christmas collaboration event, etc. was pushed onto her by the top management. Shizuka believes her "young" age is the main reason why she keeps receiving those assignments.

Although she is young at heart, Hiratsuka is very aware and sensitive about her age and single status. She is quite worried her prospects of getting married now that she is a late Christmas cake. (In Japan, there is a popular belief that women over 25 are too old for marriage. As people want to eat a Christmas cake no later than the 25th, so women want to get married no older than 25). When her age and marital status are brought up, she becomes visibly agitated, either becoming incredibly violent as she does with Hachiman, or sad to the point of crying in front of her students.

Observed by the e-mails she repeatedly sent to Hachiman, she is probably very insecure and even maybe has a Yandere side. She also shows her crafty side by tricking Hachiman into going to the Chiba village camp. She often shows her motherly, or care taking side.

She is quite wise and hands out advice when needed. She is always ready to give advice and counseling to her students. She sometimes forces the students to take part in activities for their well-being. An example of this is forcing Hachiman to participate in the Service Club, Chiba Village summer camp, and as a Cultural committee representative.

Shizuka works as a teacher at the Vanguard Academy.

In Chapter 27, Shizuka, alongside Marcus "The Kane" McGee, are seen walking in the halls of the Vanguard Academy where it's been revealed that she forced Marcus to join a club. After arriving in the Service Club room, she introduced Marcus to Yukino Yukinoshita, Yui Yuigahama and Hachiman Hikigaya, they had a rather unique conversation.

In the light novel she is said to be excellent in martial arts. It is hinted at in the anime by her displays of force towards Hachiman. Her skull clutch is described as an iron hold by Hachiman.

In accordance to her profession, she is also an excellent teacher and adviser, which is seen throughout the series. She can also play the bass which is shown in episode 12. It was mentioned that Haruno dragged her in a concert in the past. 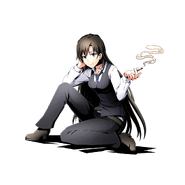 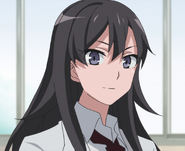 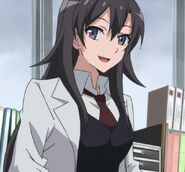 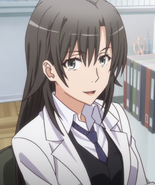 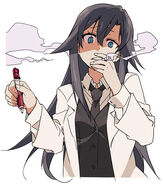