All Worlds Alliance Wiki
Register
Don't have an account?
Sign In
Advertisement
in: Characters, Males, Swordsmen,
and 3 more

Shaoran Li is one of the main characters from the Cardcaptor Sakura anime and manga.

A distant relative of Clow Reed that initially views himself as rightful Master of the Cards, leading him to act as a rival for Sakura in her own attempts to retrieve them. As time passes, Sakura warms herself to Syaoran and treats him as a close friend or consultant, oblivious that by this point he has become disinterested in inheriting the cards and has gained an overwhelming crush on her.

In the AWA fics, Shaoran is a student at the AWA Academy and is yet to make an appearance.

Shaoran has short chestnut hair and large amber eyes. He is short in height compared to his male classmates, such as Yamazaki, but is overall taller than Sakura and Tomoyo. He appears to have grown in Cardcaptor Sakura Movie 2: The Sealed Card and, later, the Clear Card series.

His summer uniform is a white, T-shirt with short sleeves along with a red neckerchief with a black stripe and a black pants, along with a white sailor-like hat with a black tassels. He wears white socks and black shoes. His winter school uniform is a black long-sleeved shirt with red and white sleeve cuffs, a white neckerchief with a red stripe, and black pants.

In Cardcaptor Sakura Movie 2: The Sealed Card, he is given a set of green battle robes from Tomoyo to match with Sakura in the battle against the film's antagonist.

As a member of the famous Li clan of sorcerers from Hong Kong, of which Clow Reed's mother herself was also a member, Shaoran had firmly believed that he should be the one to capture and inherit the Clow Cards, not Sakura Kinomoto.

He first appears as an antagonist in the story, capturing a few cards for himself in the anime. His initial attitude towards her was cold, critical, and socially awkward, to the extent of never even addressing her by her first name until the third season, and often criticized her bluntly for her flaws and clumsiness.

He was also portrayed as somewhat of a loner, given that he had been taught to be independent and self-reliant since childhood. However, as the series progresses, and especially after Sakura is officially deemed the new mistress of the Cards, Shaoran drops his rivalistic attitude towards her, and becomes a reliable ally and a beloved friend. As they spend more time together, Shaoran begins to develop romantic feelings for Sakura and becomes annoyed when she pays more attention to another guy. He himself would not admit these feelings until late in the series, after the advice from Yue and Tomoyo, the latter of whom served as his confidante about his feelings. However, the naive and innocent Sakura is completely oblivious to these feelings, and thinks of him simply as an intimate friend. It was only after their final magical duel with Eriol did he find the courage to confess to her how he truly felt about her. By the end of the series, he has completely mellowed in comparison to his initial attitude.

Although he claims certain Clow Cards for himself in the anime, Shaoran does not actually capture any cards, as the act of capturing can only be performed using Sakura's sealing wand. However, if Shaoran has played a major role in weakening or cornering the Card entity prior to its capture, credit for the capture is awarded to him (as the materialized Card floats autonomously to its owner after capture). While Sakura writes her name in romaji on the Clow Cards, Syaoran writes his name in Chinese characters.

The cards he claimed in the anime are: The Time, The Storm, The Return, The Dash, The Freeze, The Dream, The Sand, and The Twin.

During the Clear Card arc, Shaoran used a teddy bear, enchanted by his mother, to take possession of the Sakura Cards. This was done to protect Sakura from her powers grow exorbitantly while creating the Clear Cards. With the collaboration of the cards, who also wish to protect Sakura, Shaoran is able to use their powers; but doing so is extremely exhausting for him and takes longer than desired. 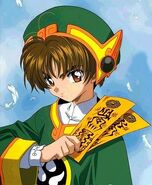 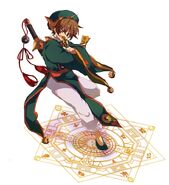