Start a Wiki
This article uses material from the “Pina Co Lada” article on the Gate - Thus the JDSF Fought There! Wiki at FANDOM is licensed under the Creative Commons Attribution-Share Alike License.

Pina Co Lada is one of the main characters from the Gate - Thus the JDSF Fought There! anime and manga.

Princess of the royal family in the Special Area. The fifth child of Emperor Malt and a concubine. She grew up establishing the Rose-Order of Knights, an all-female knight group. After her encounter with the JSDF at Italica, she became a mediator for peace negotiations between Japan and the Empire.

In the XP4 fics, Pina is currently a member of the Heroes Coalition and is a part of the Triumph Division. She also attends the Vanguard Academy as a student.

Pina has a dark red hair as well as eyes of matching color. She wears a light armor with heavy shoulder guards, and a white cape, she wears a red shirt which slightly exposes her cleavage underneath a white & black corset, black long arm sleeves with white cuffs, black strapped belts around her waist, white short skirt, white thigh-high socks, golden knee armor and black-heeled boots.

Piña Co Lada has a serious and stern personality but after spending some time together with Itami she discovered otakuculture and was greatly influenced by it. She is also not familiar with the culture of Japan as seen when the delegate reaching her hand out which, in the princess's culture, is apparently only done for wedding ceremonies. Fortunately, one of the aides tells her what to do. Piña is extremely loyal to the Empire and will do anything to ensure its survival.

Originally, she was confident that the Empire, due to its inexpugnable history, will never be defeated. However, after seeing the superior military power of the JSDF, and had later personally visited Japan, Piña later realized how inferior, in every way, the Empire was compared to Japan. Thus she saw it much favorable to establish peace with Japan rather than to continue to wage war against such a potent nation. However, unlike her father and brother, she is smart and wise enough to attempt to smuggle guns through the gate in an attempt to reverse-engineer the weapon for the Empire, despite its failed miserably in the end due to her lack of understanding about metal detector.

Furthermore, she also aware that major superpowers in others side of the gate like the US, Russia and China that are interested in invading the Special Region to reap resources and conquer the Empire, in which she becomes quite angry since the Empire will become a nothing more than piece of meat pies ready to be shredded into pieces by three titans who wants the biggest pieces but she cannot do anything against them since she knows that the Empire won't stand single chance against the potential enemies that millions time stronger than the JSDF, which the Empire never even has a single chance of defeat.

Like her father, as Duran mentioned the resemblance between Molt and the princess, Piña notably has a slight underhanded side though, unlike her relatives whose actions mainly derive out of personal gain, Piña did so out of jingoistic motives but she retains her realistic outlook like Molt and Diabo, unlike Zorzal's delusional view of life. This was shown when, as they first met and despite the fact they were initially supposed to be enemies, she had taken advantage of Itami’s kindness by sending the 3rd Recon Unit into a suicide mission, during the Battle of Italica, by positioning them alone in the least guarded side of Italica’s walls, the south gate, but this failed as the marauders had attacked the east gate; Itami was aware of Piña’s scheme but decided play along and not include this in his later report.

This was again shown when, after Rose-Order of Knights reinforcements arrived late which lead to Itami to be captured and assaulted, which violated the recently made treaty between the Empire and the JSDF, Piña tried to think of a scheme in order to silence the 3rd Recon Unit, before they return to base, though she was later stopped by Grey who pointed out that a simple apology may be enough to solve their dilemma; however Piña apparently went to some extremes such as ordering Bozes to seduce Itami, which failed due to how Bozes's excessive pride had caused further injuries towards the already wounded Itami.

After the Hakone Incident, along with Bozes, Piña had again tried another scheme by smuggling a couple of guns to take to her father, only to fail as the existence of the guns were exposed by the metal detector at the entrance of the Gate; as the guards questioned why Piña and Bozes had them, the two was saved by Kuribayashi who said that the guns were meant for self-defense. Piña had apparently stopped doing any further schemes when she firmly made the decision to make peace with Japan.

Being heavily influenced by her nation's culture, including slavery, Piña is easily surprised with how virtuous the JSDF are such as how, after neglecting to report to the JSDF that a number of Japanese citizens were captured and enslaved, she was initially unable to understand the anger that Yōji Itami and Kōji Sugawara had exhibited, when they saw the enslaved Noriko, that would lead them to make the choice to waste all the efforts they had made in forming peace with the Empire. As a child, she was shown to be fun-loving and naïve, unaware of the true nature of leading an order and battling.

She (along with Bozes) is apparently a yaoi (boys-love) fan, even as a child, and constantly refers yaoi mangas as 'art'. 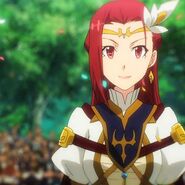 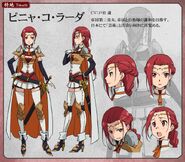 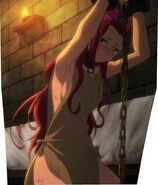 Add a photo to this gallery
Retrieved from "https://all-worlds-alliance.fandom.com/wiki/Pina_Co_Lada?oldid=41860"
Community content is available under CC-BY-SA unless otherwise noted.