All Worlds Alliance Wiki
Register
Don't have an account?
Sign In
Advertisement
in: Characters, Males, AWA,
and 4 more

This article uses material from the “Mitsukuni Haninozuka” article on the Ouran High School Host Club Wiki at FANDOM is licensed under the Creative Commons Attribution-Share Alike License.

Mitsukuni Haninozuka aka Honey is one of the main characters from the Ouran High School Host Club anime and manga.

Honey is the youngest-looking member of the Host Club, yet actually the oldest one. He's a cousin to Mori, and his family owns a prestigious martial arts dojo.

In the AWA fics, Honey is a student at the AWA Academy.

Honey posesses a babyish face and is extremely short in height, due to the Haninozuka family generations having a small stature; his actual height being 148 cm (4'10") but growing to be 180 cm (5'11") in a 2011 omake in a dream of Haruhi's. His hair is short and honey-blond in color (as opposed to Tamaki, whose hair is pale blond). When not in Ouran's school uniform, he tends to dress simply in the anime but outrageously in the manga. He is typically seen with his cousin Mori or his stuffed bunny Usa-Chan (a.k.a. Bun-Bun) by his side, and whenever he speaks, flowers float around his head; the only exceptions being when he is angry, upset or confused.

Although he often appears dimwitted, Honey is actually highly intelligent and clever, and is able to see that Tamaki, Hikaru and Kaoru all have feelings for Haruhi. Despite his generally positive nature, he angers easily when awakened from slumber and since his bloodtype is AB, most of the hosts believe that he has a split personality (i.e. Dark/Nice Honey). As the oldest person in the club, Honey refers to his fellow hosts using the "-chan" honorific. He also serves as a mentor-figure for the hosts, especially Kaoru, and is eager to help others find their identity, just as Tamaki helped him find the courage to be his own true self. However, he does not believe in babying people, even Mori, and typically does not offer his advice unless he is approached first. He is adoring of his stuffed bunny, Usa-chan, as it was made just for him by his late grandmother, and he harbors an insatiable appetite for sweets and cake, admitting that he eats three whole cakes for dessert every evening after dinner.

Honey is born under the star sign of Pisces, the Fishes. The positive traits of this sign are imagination, kindness, compassion, intuition, sensitivity and selflessness; the negative traits being escapism, idealism, a weak will, over-sensitivity, pessimism and indolence. Since he is born on the 29th of February, leap-day, Honey is considered a "leapling" and only celebrates his actual birthday once every four years, giving these qualities a lesser influence on his personality. 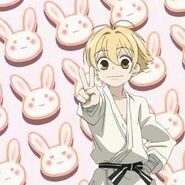 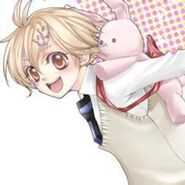