Start a Wiki
This article uses material from the “Lelei La Lalena” article on the Gate - Thus the JDSF Fought There! Wiki at FANDOM is licensed under the Creative Commons Attribution-Share Alike License.

Lelei La Lalena is one of the main characters from the Gate - Thus the JDSF Fought There! anime and manga.

A 15 year old human sorceress in the Special Area, the second disciple of Cato the Elder Sage. She quickly learns Japanese from the JSDF and serves as a translator for communications between the JSDF and the Empire in negotiations.

In the XP4 fics, Lelei is currently a member of the Heroes Coalition and is a part of the Triumph Division. She also attends Vanguard Academy as a student.

Lelei has a short blue hair and blue eyes. She wears a light-green dress, with a blue tabard on top and a blue turtleneck, long-sleeved woolen shirt underneath. She wears blue boots, and can be seen holding a staff with a blue wing on it.

Due to her petite frame, she looks younger than she actually is.

After stressing herself to create and open the Gate several times, her hair turn into silver colour much like Hardy's hair.

Lelei is generally an emotionless girl, with her face constantly fixed in an expressionless look. She is usually calm and silent amongst her friends and would always speak in a collected way. She rarely raises her voice, even in dire situations.

However, there are cases where she displays her emotions, such as surprise and awe when she was saved by the JSDF when she was nearly stomped by a horse.

When she joined Itami on a quest to destroy the Fire Dragon, her face contorted into an expression of dark delight, showing bloodlust and rage, when she struck down the dragon with her spell.

During her conversation of Giselle, she shows some devious side of her as she plays loan shark with Giselle's gigantic debts making Giselle sob in misery.

Magic: Lelei is a practitioner of magic of the Lindon School, being taught by Cato El Altestan. Due to her scientific knowledge learning from Japan's textbook, her magic power increases to the point making her the strongest mage in the entire Special Region.

Telekinesis: Lelei possesses telekinetic powers, which is shown when she levitates countless swords during the fight with the Fire Dragon and directs them to pierce their target.

Gate Manipulation: Lelei can open Gates to other worlds as well as close them. However, this ability is limited since she nearly dies from the strain of opening the Gate and she can mostly open a partial Gate and not a whole Gate. According to Hardy, in order to open the Gate to Japan, Hardy herself has to use more than half of her power since making a fabric in space-time is extremely complex and taxing. Furthermore, it is revealed that she has to take several months to learn about Quantum Physics to open the Gate properly. In order for her to not risk her life opening the gate, Lelei has to use Hardy's hair so Hardy can give her part of her power to open the Gate. This power makes her to be valuable enough to the communication and logistic between Japan and the Special Region and at the same time making her becomes a bargaining chip of China when they kidnapped her to force Japan into submission.

High Intelligence: Lelei is highly intelligent, being able to learn the Japanese language sufficiently enough to act as a translator for Itami's group, and in a short amount of time. She's the most fluent speaker of the language among the native people. She also managed to easily understand the general principle behind firearms and later she was able to create explosives with magic. She is also able to understand scientific concepts revealed to her via Japanese textbooks she acquired, allowing her to enhance her own magical abilities to the rank of an archmage.

Driving: In Episode 18, it is shown that Itami taught her how to drive a Humvee. However, the full extent of her driving abilities is unclear. In Chapter 52 Manga she refuses to be replaced at the wheel and when asked if she enjoys driving says yes.

Peak Human Endurance: she is shown to strong enough to resist mental and physical torture when she was tortured by the Chinese agent to extract her information about how control the Gate, in which she endures long enough for the Japan SWAT team to rescue her and Diabo.

Magical staff: As a mage, Lelei carries a magical staff for combat, however, she mostly uses her hand to conjure spell for combat purpose. 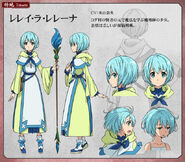 Add a photo to this gallery
Retrieved from "https://all-worlds-alliance.fandom.com/wiki/Lelei_La_Lalena?oldid=40986"
Community content is available under CC-BY-SA unless otherwise noted.