All Worlds Alliance Wiki
Register
Don't have an account?
Sign In
Advertisement
in: Characters, Males, Student,
and 2 more

Kenma Kozume is a character from the Haikyuu!! anime and manga.

Nekoma’s setter. Hinata meets him not long before Nekoma’s first encounter with Karasuno. Kenma is not very good with people, so he specialized in observing them. Because of that, he became skilled at reading his opponents and uses this to predict their moves during a match.

In the AWA fics, Kenma is set to appear in a future AWA storyline.

Kenma is depicted with an average height, a small build, and has an unsteady posture. He has many outstanding features, including his cat-like golden eyes and blond hair with black roots (sometimes referred as "Pudding-Head"). He had dyed his hair in his first year of high school, claiming that he did not want to "stand out". As shown in a Haikyuu! extra, Yamamoto claimed he looked like Sadako while gaming with his black hair covering his face, much to Kenma's dismay. He dresses casually, and his Nekoma uniform is the standard black and red jersey. He is usually seen carrying a portable game console and a cellphone with him.

Kenma has a very relaxed and laid back personality. He hardly ever loses his cool and usually never gets excited or fired up about anything (except Hinata, video games, Lev - in the The Arrival of Haiba Lev (OVA), which Kuroo points out, and Yamamoto in the past). He is quiet and reserved and does not often voice out his opinions since he is afraid of what others might think of him, and hates standing out or being noticed in any way.

Kenma is not very approachable and doesn't make friends easily. His manner of speaking tends to be shy and reserved. He also has a disdain for pointless authority and doesn't just blindly expect his juniors to respect him, unlike others.

Kenma rarely shows emotions; as such, he usually ends up giving a cold impression to others, but it is shown that he does care about his friends and notices small upsets in their behavior. An example is when they were younger Kuroo badly lost a volleyball match and was feeling down and Kenma noticed this feeling and despite not really caring for volleyball asked if Kuroo would like to practice and "level up" to which he agreed eagerly. Another can be seen later in the manga when he admits that he tries hard to win for his friends.

Apart from Tetsurō Kuroo, his next-door neighbor, Kenma didn't befriend anyone ever since he was at elementary school. Despite his modest personality, Kenma is actually quite skilled in volleyball, with his extraordinary game sense, technique and strong analytical abilities, which makes up for his slight lack in power, speed, and stamina.

Despite seeming somewhat apathetic about it Kenma is the type of person to only do things he enjoys and would quit volleyball if he didn't enjoy it someway, which according to him was the aspect of improving his skills (kind like a video game). However, despite having a tough time admitting his feelings, the real motivation behind his continuation of volleyball are his friends.

Kenma is known as the "brain" of Nekoma for his sharp strategic mind and incredible ability to develop extensive plans against his opponents. He is naturally observant of others' behavior due to being overly concerned about what other people think of him.[1] This helps him notice the tiniest details of his opponents, including their habits and personality, and use these traits to his advantage. Kenma would calculate his opponents' skillset before coming up with an meticulous plan for his teammates to follow. Most of his plans are unnoticeable in the beginning but become more effective as time progresses. As such, his opponents' often fail to realize they have fallen into his trap before it's too late.

While Kenma excels at strategizing, he is unathletic and possesses low stamina. According to Coach Ukai, he, as a setter, is supported by the entire team's receiving power. In other words, Kenma can utilize his talents because of the receivers' ability to cleanly return the ball to him. More recently, he has become more active and would seek out offensive opportunities instead of solely relying on his teammates' perfect receives.

Like the rest of his team, he is flexible and good at receiving the ball. 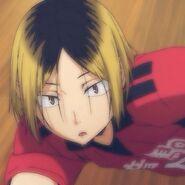 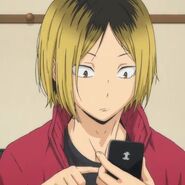 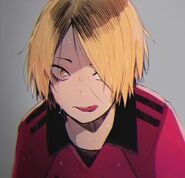