This article uses material from the “Chizuru Tachibana” article on the Kimi To Boku Wiki at FANDOM is licensed under the Creative Commons Attribution-Share Alike License.

Chizuru Tachibana is one of the main characters of the Kimi to Boku anime and manga.

Chizuru is a half-Japanese transfer student from Germany. For a half foreigner, he is quite short and has a complex about his height.

Some years ago he came to Japan for a short time and met Yuuki at a park. As a little kid he did not know any Japanese, but when he later moved to Japan during the second year of high school he was already fluent in Japanese. Chizuru likes girls but has no experience with them. He has a crush on Masaki Satou.

In the AWA fics, Chizuru is the main protagonist of the AWA series of fics. Chizuru is a student of the AWA Academy and is part of Class 1. He is the assigned leader of a huge group that he will lead in the future. He is also part of AWA Rookie 20 and is ranked # 7.

In the XP4 fics, Chizuru is a member of the ALL-STARS JUSTICE as a First Line Defender.

In the TWA fics, Chizuru is one of the major characters. Chizuru is part of the Honor Fighting Force and is a member of The Ragtag of Heroes.

Chizuru has blonde hair that he keeps waxed up and can be occasionally seen down in some scenes usually after it gets wet. He has a mole under his right eye that he calls his "best feature" and although being half-German, he is quite short in height. He also has bright blue eyes.

His attires changes on different occasions but he usually wears a blue school uniform over a white hooded jacket, black pants and red & white shoes.

He is noisy, cheerful and loves to play and is a bit of an idiot. He also made nicknames for the boys, Masaki Satou and pretty much with everybody else. With Yuuki Asaba, Chizuru often makes Kaname Tsukahara mad and usually ends up getting yelled at by him.

Chizuru remains the same but with a few added traits. Despite being an annoyance to everyone, he has certain charm that draws people towards him, Chizuru is so polarizing that he was well-beloved and hated by people. He admires his friends' amazing feats but feels inferior to them making him insecure with his capabilities. After getting past with his insecurities with the help of his friends, Chizuru became more confident, out-going and is ready to take on everything thrown on his way, proving time and time again what he truly worth.

Unlike his canon counterpart whom is pretty stupid, in this fic, Chizuru is extremely intelligent and only pretending to be stupid so he won't draw attention with numerous universities.

Chizuru is pretty hopeless in romance, he gains feelings for both Masaki and Homura Akemi yet he is aware that they won't reciprocate his feelings. He later fell in love with Yoshika Miyafuji and later become a couple.

Chizuru is a very skilled fighter, being trained in the academy and as well being part of the AWA Rookie 20 is a huge feat. Chizuru's fighting skills are most brawling but he is also skilled in using swords, and can fight his opponents with a baseball bat or any other unorthodox objects. Chizuru has immense strength, great endurance, agility and resiliency.

Chizuru has a special ability to teleport himself from a short distance or even farther, but he can only use it ten times a day. Chizuru learns how to use chakra and has a mysterious magical ability that is compared to holy beings. It is later revealed that Chizuru is the reincarnation of the Goddess, Harmony, this gives him divine powers that he is yet to control.

But Chizuru's ultimate feat is his Wild Side which he becomes a lot dangerous and powerful, all of his five senses are heighten up, speed and strength are increased, and would inhibits traits akin to a feral animal.

Chizuru learned how to use chakra and magic. He also learned six moves of the Rokushiki and also gained the power to use Kenbonshoku Haki. 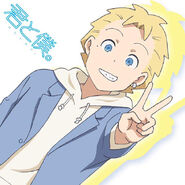 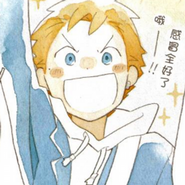 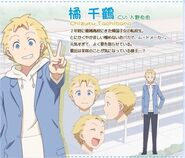 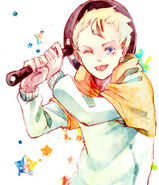 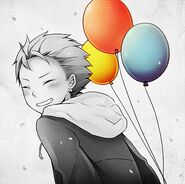 Add a photo to this gallery
Retrieved from "https://all-worlds-alliance.fandom.com/wiki/Chizuru_Tachibana?oldid=58900"
Community content is available under CC-BY-SA unless otherwise noted.