This article uses material from the “Akame” article on the Akame ga Kill! Wiki at FANDOM is licensed under the Creative Commons Attribution-Share Alike License.

Akame was originally sold to the Empire along with her sister Kurome to be trained as an assassin, Akame eventually defected to the rebelswhen she was sent to assassinate General Najenda, the leader of Night Raid and joined them to overthrow the corrupt monarchy.

In the AWA fics, Akame is a student at the AWA Academy and is part of Class 4.

In the XP4 fics, Akame is a member of the Heroes Coalitions and is part of Night Raid. She also attends Vanguard Academy as a student.

Akame is a young girl with long black hair that reaches down to her knees and red eyes. She wears a dark sleeveless mini dress with a white collar and a red tie; she wears a red belt that has a red side skirt cover. She wears it with long black socks and black shoes. She also wears red gauntlets and black gloves. She sometimes wears a long dark coat in battle. She is often seen carrying her Teigu, Murasame. After activating Murasame's trump card, she has faded red scars all over her body. In Soukai, Akame wears a short black Yukata with a white sash.

Akame appears to be a very serious and coldhearted person which stems from her hellish training that the Empire forced her and her sister through, but it is eventually revealed that she is just socially awkward. She cares about her comrades very much and she is always worried that one of them may not make it out alive due to her experience that first war always has a high mortality rate. When Tatsumi fought Ogre, she stripped him of his clothes to check his body for wounds and Akame rushes to Mt. Kageboshi to aid Hinata who was about to be killed by Yomihime.

She also tends to hide her emotions when it is revealed that a comrade dies, such as seen with Sheele, making Tatsumi mistakenly and incorrectly assume that she deals with it easily, because she is used to it. However, this prompts her to break into tears saying that she can never be fine when she loses a friend, for it is the most horrible thing of which anyone can experience. She is then comforted by a sorry Tatsumi who resolves to not die and never let her experience such pain again, making her smile.

Upon facing her enemies, however, she shows absolutely no mercy towards them shouting words such as "eliminate" and "consign" to show the lack of mercy she has and also to strengthen her resolve to kill them. After donned by Murasame's curse, she barely said such words.

Akame loves to eat and is surprisingly known to be a big eater (she usually prefers meat from danger beasts and fish), much like her sister Kurome. She is passionate about food to the point that Sheele noted how the "usually cool" Akame turned mad when she had burned some meat. Additionally, she is usually in charge of cooking the base's meals.

Akame is often considered to be one of the strongest members of Night Raid, slaying even the strongest of enemies with minimal effort. Her hellish assassination training allows her combat prowess to be on par with those as powerful as the General rank within the military levels of the Empire, Esdeath herself acknowledging her strength. Akame is an extremely skilled master swordswoman, able to wield her Teigu Murasame with utmost dexterity and precision, able to slay numerous enemies, even highly skilled and powerful enemies with incredible ease. She easily slayed Izou a fellow master swordsman in combat and would have killed Tatsumi, if not for the statue his chief villager gave him before embarking on his journey. At her full strength, Akame managed to hold her own against Esdeath, a tremendously powerful master swordswoman and ultimately killed her with single precise thrust, plunging Murasame's shattered blade to stabbed directly into Esdeath's heart. Akame possesses tremendous speed, agility and reflexes, being able to dodge and counter-attack with deadly results, and is also skilled in hand to hand combat. She also gives off no killing intent at all when she fights, making it difficult for the enemy to sense her presence. According to Wave, she can run at Mach 1 (velocity of sound in the airflow which is approximately 340 meters per second). Like the other members of the Elite Seven, she is immune to most poisons.

Akame carried the Teigu, One-Cut Killer: Murasame, a katana known for being coated in an immensely deadly poison that could kill those cut by it within seconds, as the poison itself had no antidote. The Teigu's trump card, the ability to strengthen its user with the power of its poisonous curse for a short amount of time, was revealed during the final battles against the empire. It is revealed near the end of the manga that Murasame's poison could only target one life at a time; using this to her advantage, she killed Tyrant without hurting Tatsumi. 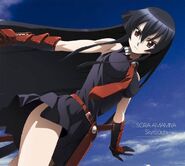 Add a photo to this gallery
Retrieved from "https://all-worlds-alliance.fandom.com/wiki/Akame?oldid=59455"
Community content is available under CC-BY-SA unless otherwise noted.