This article uses material from the “Akamaru” article on the Narutopedia at FANDOM is licensed under the Creative Commons Attribution-Share Alike License.

Akamaru is a character from the Naruto anime and manga.

Akamaru is a nin-dog (ninken) from Konohagakure's Inuzuka clan. He is Kiba Inuzuka's partner, as well as his best friend and constant companion. He is also a member of Team Kurenai.

In the AWA fics, Akamaru is a student at the AWA Academy.

In the TWA fics, Akamaru debuted in the Twisted World Animania - Naruto.

In Part I Akamaru was a small puppy with white fur, and resembles a Great Pyrenees, regularly carried on Kiba's head or inside his jacket. Akamaru's eyes are usually squinted, appearing closed, and he has a brown nose, as well as brown patches on his ears and a brown outline around his mouth. His fur on top of his head is styled to somewhat resemble a mohawk. Whenever Akamaru ingests soldier pills his fur turns red and he becomes more feral, which is why he was named Akamaru, "Aka" meaning "red", and "maru" being a common ending for male names in Japan.

In Part II, Akamaru has grown into a full-sized adult large-breed dog. His size is such that Akamaru can now have Kiba ride on his back comfortably. Despite this, Kiba claimed he failed to notice due to the amount of time they spend together. Apart from his size, his general appearance has remained the same. Years after the Fourth Great Shinobi War, Akamaru aged a bit, with a few wrinkles appearing on his snout, though was otherwise unchanged.

Akamaru has been described as active and devoted. This can be seen from his interactions with people especially his best friend and companion Kiba whom he has always been with since the two met. They often spend their time going on walks, or more accurately, running through trees chasing one another. His devotion is most often seen when Kiba is hurt in battle, Akamaru will immediately run to his side.

In Rai no Sho, a story from Akamaru's point of view reveals much of his personality. Akamaru is revealed to have a humorous thought process by erroneously explaining something, but then immediately correcting himself. He has a very scientific thought process about humans, thinking they enter oestrous too late in life when they should be focusing on being shinobi instead of finding a "mate". It's also revealed Akamaru is very overprotective of Kiba as he immediately tried fruitlessly to pull his master away from Tamaki when he realised the two had a strong mutual attraction to each other, as he didn't want Kiba to shy away from his training in favour of romancing Tamaki like "the others".

In the epilogue, Akamaru had grown old and took delight in just napping most of the day and playing with his offspring. When prompted by Kiba to back him up, he mocked Kiba's notion that he turned down the Seventh Hokage seat, giving a sly smirk.

Akamaru is a member of the Heroes Coalitions and is part of the Death City Squad. He also attends at Vanguard Academy as a student.

In Chapter 9, Akamaru, alongside his team, the Death City Squad, are seen in a large desert taking on several gigantic Emotionless. After defeating the creatures, Death the Kid made an urgent order to head back to Neo-City after hearing that Donzerg Stronghold plans on painting the La Lopez Memorial Museum with rainbow paint in a zigzag pattern, much to Akamaru and everyone's bewilderment.

In Chapter 8, Akamaru, alongside Kiba Inuzuka, are seen chasing a cat around the Vanguard Academy grounds.

In Chapter 1, Akamaru, alongside the Death City Squad, Qrow Branwen, Jaune Arc, Lie Ren and Nora Valkyrie, arrives in Mistral. They later met up with Leonardo Lionheart at the Haven Academy where Qrow told him information about the Spring Maiden but Leonard delays going after her, much to their frustration. Later that night, everyone are seen at the living room of their house when Qrow, Death the Kid and Brook arrives and introduced Oscar Pine to everyone, Oscar then revealed that he's Ozpin, much to everyone's bewilderment.

In Chapter 2, Akamaru, alongside the Death City Squad, Qrow Branwen, Jaune Arc, Lie Ren and Nora Valkyrie, are seen inside their current residence somewhere in Mistral where they had a conversation about Oscar Pine being Ozpin. They then witnessed Ozpin taking over Oscar, reintroducing himself, telling them his plans to retrieve the Relic of Knowledge and decided to train Oscar alongside Ruby Rose, Jaune, Ren and Nora, much to everyone's confusion and bewilderment.

In Chapter 6, Akamaru, alongside Kiba Inuzuka and Qrow Branwen, walks around the city of Mistral looking for Huntsmen to help them out in recovering the Spring Maiden and protecting the Relic of Knowledge. However, none of the Huntsmen he has listed, nor any other Huntsmen in the Kingdom, are available, much to their disappointment. Then a portal appeared before them and were greeted by Yang Xiao Long, Weiss Schnee, Ichika Orimura and Tomomichi Motoyama. Later, Akamaru and everyone arrived in their residence where Weiss and Yang reunited with Ruby Rose while the others watches them with a smile.

In Chapter 7, Akamaru took part of a dinner get-together at the residence somewhere in Mistral. After Ichika Orimura and Tomomichi Motoyama left for another mission in Atlas, they had a conversation about their recent experiences, Ruby Rose, Jaune Arc, Nora Valkyrie & Lie Ren revealing their Gifts and Ruby & Jaune revealing that they're a couple, much to Weiss' shock and Yang's ire. Later in the living room, they were joined by Qrow Branwen, Oscar Pine and Ozpin, everyone are present when Ozpin explains to them about the magic he gave to Qrow & Raven Branwen and detailed that everyone had a choice. After that, everyone decided to keep moving forward and decided to enjoy the rest of the night.

In Chapter 10, Akamaru, alongside his team, Yang Xiao Long, Weiss Schnee, Jaune Arc, Lie Ren, Nora Valkyrie, Qrow Branwen and Oscar Pine/Ozpin are seen gathered in their residence somewhere in Mistral. Qrow then got a call from Leonardo Lionheart and told them to meet them in school however, Shadow the Hedgehog revealed that an ambush awaits for them, much to everyone's shock. After that, they decided to counter their enemies with an ambush of their own.

In Chapter 11, Akamaru, alongside his team, Qrow Branwen, Nora Valkyrie, Jaune Arc, Lie Ren, Yang Xiao Long, Weiss Schnee, Oscar Pine and a number of heroes from the Heroes Coalitions, arrives in Haven Academy and confronted Leonardo Lionheart, Cinder Fall's group, Raven Branwen and Vernal. Then both sides got into a battle with Akamaru taking on a number of Emotionless.

In Chapter 12, Akamaru took part in a battle at Haven Academy.

Akamaru's heightened senses, such as smell and hearing, along with Kiba's ability to communicate with him, makes him a highly capable ally for gathering and sharing information. He can 'sense' chakra with his nose, which allows him to judge an enemy's strength.

In combat, Akamaru often takes Kiba's form (albeit having a much more feral appearance) using the Beast Human Clone technique. This gives him the ability to perform a ferocious spinning attack with the Passing Fang, which can be collaborated with his partner to make it more difficult for the opponent to avoid. The duo can also fuse together into a giant, two-headed wolf to perform a highly devastating attack. Due to the sheer speed of this attack, it is difficult for them to see their target. To make up for this, Akamaru would mark the target by urinating on them beforehand, allowing their heightened sense of smell to take over instead.

He has also been shown to be adept at setting traps, such as explosive tags on his own. Akamaru has not been known to talk like some other ninken, but did speak briefly at the end of a special new years episode in the anime. 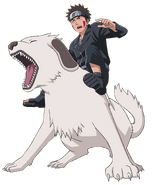 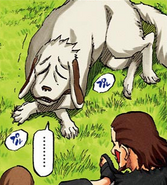 Add a photo to this gallery
Retrieved from "https://all-worlds-alliance.fandom.com/wiki/Akamaru?oldid=59454"
Community content is available under CC-BY-SA unless otherwise noted.